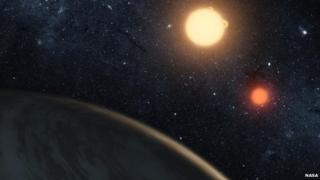 That means that every day when the sun sets, planet Kepler-16b gets a double sunset!

The planet is 200 light years away from Earth, and it's a brand new phenomenon that's never been seen before.

In fact, it's more like science fiction - the Star Wars movie saga featured a planet with two stars called Tatooine.

Models showing the formation of planets prove it is possible for worlds to form around twin stars, but astronomers have only set eyes on them in films and TV shows.