No British wins in Europa League 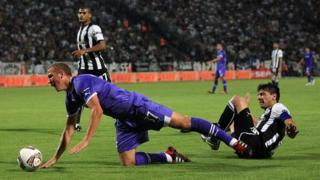 None of the British teams in the Europa League won on Thursday night.

Birmingham were beaten 3-1 at home by Braga, while Fulham played out an entertaining draw against Dutch side FC Twente.

Tottenham's 0-0 draw with PAOK Salonika didn't go down well with boss Harry Redknapp, who said his side should have had a first-half penalty.

There was also bad news for Celtic, after being allowed back into the competition. They lost 2-0 against Atletico Madrid.

Things looked promising for Stoke who were leading 1-0, until Dynamo Kiev's Vukojevic scored an equaliser during injury time.