Draws for Man United and Man City in Champions League 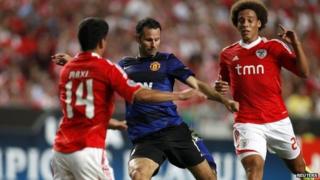 It was a frustrating night for Manchester United and Manchester City after both teams drew in their Champions League matches.

Ryan Giggs scored the equaliser for United three minutes before half time, giving them a draw against Benfica in their first Group C game away.

Meanwhile City drew 1-1 with Napoli in Group A. It was Aleksandar Kolarov's free-kick that managed to rescue a point against the Italian team.

It was a nerve-wracking night for City, who haven't played elite European football for 43 years. The team's boss, Roberto Mancini, admitted the team were "so nervous" before the game.