Is the battle for Libya over?

But the battle for Libya still isn't over, because Gaddafi supporters still control four areas of the country.

The rebels say they still need more weapons to help capture these spots.

Where is Colonel Gaddafi?

No one really knows where Gaddafi is, but he has said he'd rather die than leave the country, so most people think he's hiding somewhere in Libya. 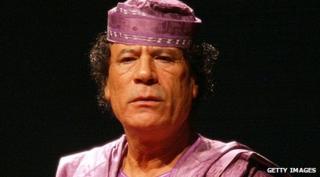 Getty Images
Colonel Gaddafi before he went into hiding

While he was in power, he built a network of underground tunnels in Tripoli which people think he might have used to escape the capital city.

Libya has huge deserts so there are plenty of places to hide.

Some of his family have fled to Algeria just next door, and this week one of his sons went to Niger.

Even though he is in hiding, Colonel Gaddafi is still making his views heard by putting out messages on a TV channel in Syria.

Prime Minister David Cameron's visit today is a show of support for the country's new leaders - the National Transitional Council.

Britain has been one of the main countries heading up the international operation to build a new Libya. 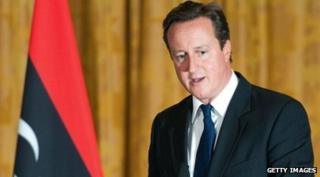 Getty Images
"It is great to be in free Libya," David Cameron said on Thursday

The rebels are led by a man called Mustafa Abdul Jalil. They want to create a new government by the end of the month and hold elections within eight months.

But there is still a lot of work to be done. They don't have full control of Libya yet, and until Gaddafi is found, there is always a possibility that he will plan more attacks.