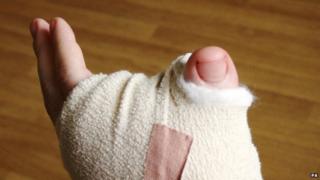 A man who accidentally cut off his thumb has had his big toe attached there instead.

James Byrne from Bristol was sawing through wood when he hacked off his left thumb last December.

Doctors tried to re-attach his damaged thumb but it didn't work, so plastic surgeons transplanted his left big toe to his hand instead.

"We tried everything, including leeches, to get the blood flowing again but it didn't take," said James.

"Mr Khan (the doctor) said to me, 'You will have a thumb even if I have to take your toe'. I thought he was joking, but he was serious and nine months later here it is."

James will now have physiotherapy to help him adapt to using his new toe thumb.