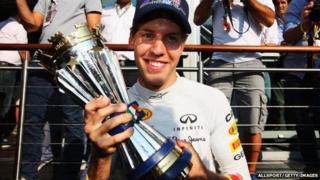 Sunday's victory puts him 112 points ahead of his nearest rival, Fernando Alonso of Ferrari.

A win at the next race in Singapore could guarantee the championship for Vettel.

Alonso took an early lead in Monza, but Vettel re-passed him on lap five and steadily built his lead from there.

Alonso now says he's given up all hope of catching Vettel this season: "Six races to go so obviously the championship is impossible. Not mathematically but we are no longer in contention.

"We are fighting for second place in the championship," he said.