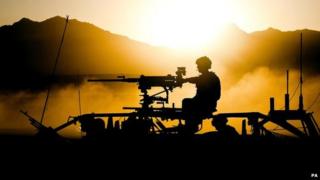 The events of September 11 2001 have had far-reaching consequences.

The attacks caused international outrage, and led to the US President George W Bush declaring a "war on terror".

America and its allies vowed to hunt down the leaders of al-Qaeda, the terrorist network behind the attacks, and bring them to justice.

The war in Afghanistan

At the time, a group called the Taliban were in charge of Afghanistan, and they allowed al-Qaeda to operate there. People thought the network's leader Osama bin Laden was sheltering there, as well.

In October 2001, the US and the UK invaded Afghanistan to try and destroy al-Qaeda and bring down the government which sheltered its leaders. Troops from other countries became involved too.

The Taliban were quickly driven out of the capital city, Kabul, but even today Afghanistan remains a dangerous place. British troops and forces from other countries are still there, trying to help the Afghan government build a stable nation - but Taliban fighters continue to carry out surprise attacks, and soldiers and Afghan civilians are still dying.

The British government has said that UK troops will have pulled out of Afghanistan by 2015, and earlier if possible, provided the Afghan forces are able to keep the country safe.

It was in 2011, ten years after the war in Afghanistan began that Osama bin Laden was eventually found by American soldiers in Pakistan, where he was shot and killed.

The war in Iraq

In 2003 the United States and Britain led an invasion of Iraq, overthrowing the government led by President Saddam Hussein.

The American and British governments believed that, as well as being a threat to other countries, the Iraqi government was sympathetic to the actions of terrorists, including Al Qaeda. In Britain, there was much debate over whether this was true, and the invasion of Iraq was controversial.

Saddam Hussein's government was quickly overthrown. In the years that followed there was a great deal of violence in Iraq by groups who didn't think the foreign troops should be in Iraq, and Iraqi groups fighting each other. Many thousands of Iraqi civilians died in the violence as well as thousands of foreign troops.

When he became President in 2009, Barack Obama announced that he would withdraw American troops from Iraq by the end of 2011. Violence has declined in Iraq but it still remains a dangerous country.

The September 11 attacks have also had a lasting impact on airline security, to try and make it more difficult for terrorists to get onto planes.

Stricter searches are now made before people can board flights.