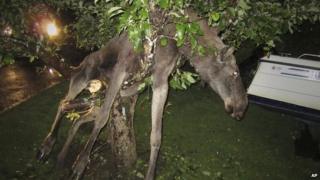 Ever been so hungry that you've been tempted to go somewhere you shouldn't?

Well that's what happened to this elk in Sweden who had to be rescued after getting stuck in an apple tree.

The animal had apparently been looking for fermenting apples when she lost her balance and became trapped in the branches.

Rescuers think that she may have eaten a few too many of the apples, making her a bit dozy.

Emergency services managed to free the elk from the tree by sawing off some branches - they left her to sleep off her overeating.

The next day she was fine and wandered back into the woods, hopefully having learned her lesson!

Locals say it isn't unusual to see woozy elks wandering around the area at this time of year.

The fermenting apples on the trees become slightly alcoholic so when the animals eat them they get light-headed.