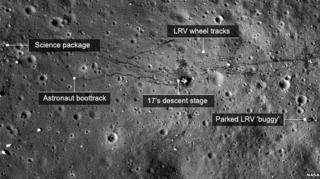 Forty-two years after man first walked on the Moon, there are still some people who think it was a hoax.

Neil Armstrong and Buzz Aldrin first set foot on the Moon in 1969, but some people think the footage of them there was actually filmed in a TV studio.

Now Nasa think they've got the evidence to prove them wrong, with their latest close-up photos of the Moon's surface.

They say they show track marks left by space vehicles like Apollo 17's Moon Buggy and even astronauts' bootmarks.

The images were recorded by a robotic space satellite, called the Lunar Reconnaissance Orbiter (LRO), which has been circling the Moon since 2009.