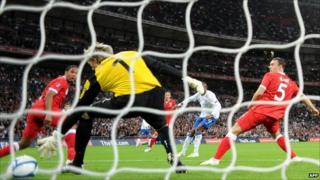 England have moved to within a point of Euro 2012 qualification after beating Wales 1-0 at Wembley on Tuesday night.

Ashley Young scored in the first half after some good work from Stuart Downing. England now top Group G by 6 points.

England will next play Montenegro - which they only need to draw to go through.

Steven Naismith scored the game's only goal in the first half, which means Scotland can still finish second after Spain won their Group beating Lichtenstein 6-0.

Three separate errors led Northern Ireland to a 4-1 defeat in Estonia, meaning their hopes of qualifying for next summer's European Championships are all but over.

The Republic of Ireland drew 0-0 with Russia.