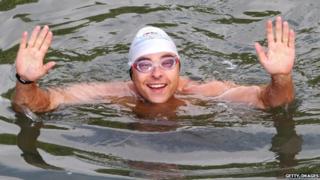 And he's off! Funny man David Walliams has started his 140-mile swim of the River Thames.

The comedian's braving the murky river waters for eight days, hoping to raise loads of money for Sport Relief.

He set off from Lechlade in Gloucestershire, near the source of the Thames, and will finish off at Big Ben in London.

In 2006 he swam across the English Channel - but this swim is going to be seven times as long!

So how's he going to get through such a tough swim?