Elena Baltacha loses her second round match in US Open 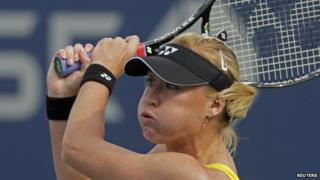 British tennis player Elena Baltacha has been knocked out of the US Open by the 2004 champion Svetlana Kuznetsova.

That means there aren't any British women left in the singles competition at Flushing Meadows in New York.

Baltacha took an early lead in the first set but her Russian opponent soon came back and won the match in straight sets; 6-4, 6-3.

"I started really well and then she got on her game and it was hard," said Baltacha after the match.

Andy Murray is the only British player left at the US Open.

He plays Dutchman Robin Haase in his second round match on Friday.