Is it fair that an 11-year-old can be punished by a court? 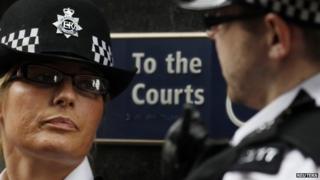 On Tuesday the courts are telling one 11-year-old, who got caught stealing during the England riots, what his punishment is going to be.

Lots of kids and teenagers were involved in the riots that happened across England just a few weeks ago.

But some people are saying the boy's too young to be sentenced by the courts.

What do you think? Is it fair that an 11-year-old can be punished by a court?

Sorry this page is now closed, but check out some of your best comments below.

"We think it is fair because you have your own mind at 11 and you can't exactly steal without thinking about it. So therefore he should be punished for doing something that is blatantly wrong. Plus his parents should be given some kind of warning for letting their kid go out at night in riot torn Britain!"

"If you don't punish the people that were caught stealing during the riots then they are never going to learn that it is wrong. You punish someone so that hopefully they don't do it again and realise that is bad to steal. If we let the people who stole off, than they might attempt to do it again."

"I think it's fair, otherwise everyone will think they can get away with it when they can't!"

"Yes he should be responsible for his own actions, furthermore at the age of 11 you would already know right from wrong, and considering he had warnings for other things he should be punished. He needs to know the consequences of his actions."

"I think it is correct to be sentenced from the age of 10 because if I was the worker in the shop and somebody stole a bin worth £50 it would be unfair to me and I wouldn't have done anything wrong, but the boy who stole the bin would have broken the law and been let off which is wrong!"

"I think it's right and wrong because at the age of 11 you're mature enough to know what is right or wrong but then it's also too young to be punished by the law.... maybe they should punish them, but not very harshly!"

"I think it is fair to punish an 11-year-old by the courts but probably no younger than 11 because a 10 or a nine-year-old wouldn't understand."

"I think he should be punished because he knows what is right and what's wrong, so in all fairness something has to happen. It's unfair if adults get punished for it and he doesn't."

"I think it is fair that an 11-year-old should go to court because he was involved in the riots. They all went to court so he should."

"I think it is fair because he knew what he was doing so why should he get off scot free?"

"He shouldn't be sent to jail but he should have to do some kind of community jobs, because he knew what he was doing, no one forced him to do it, so he should be punished in some way."

"I think it's more than fair to punish him. If he thinks of himself as 'cool' for stealing something because people older than him do it, then he deserves the exact same punishment. It's reasonable to say that the age doesn't matter in this case."

"Of course you should be punished if you do the crime! It's pathetic that people think they are young enough to do something like that and get away with it!"

"If you're 11, you've been taught about responsibilities and what's right and wrong. He clearly knew it was wrong but still did it. He should be punished. If not, people will use it as an advantage and try to get away with other crimes."

"Yes, he should be punished! It's his own fault, he shouldn't have got involved with the riots!"

"I think it's right for him to be punished. I think his parents should be taken to court because at 11 you shouldn't be out in town on your own, especially when riots are happening."

"It's totally fair. This kid should have been at home being properly supervised by his parents."

"Yes! It is fair! If every 11-year-old went around breaking the law, then they would have to punish everyone and not just let them get away with it. Plus, he needs to recognise that he behaved wrongly and that stealing bins is not something to be proud of."

"I think that he should be punished through having to do community service. He probably wasn't thinking what he was doing at the time. If he was to do some community service then he'd soon learn not to do it again."

"Yes. A child that age knows what's right and wrong. Even though he did something wrong, he probably knew himself that it was wrong."

"I don't think it's fair because an 11-year-old doesn't understand what happens if you get involved in things like that."

"Yes. I think that they should also name them and their parents."

"No, I don't think it's fair because an 11-year-old is not mature enough to be responsible for his actions though he should still have to be asked by the court to do something useful for the streets and the community."