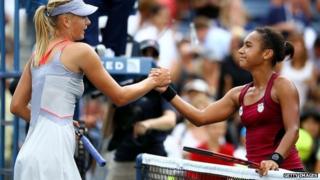 British teenager Heather Watson gave former US Open champion Maria Sharapova an almighty scare in the first round of the tournament.

Ranked 100 places below her Russian rival, Watson wasn't expected to beat the world number four but almost pulled off one of the great US Open shocks.

Despite losing, Watson said it had been a really great match and she'd had fun.

Elsewhere, fellow Brit Laura Robson is through to the second round in her first US Open, after her Japanese opponent Ayumi Morita retired in the second set with a shoulder injury.

Meanwhile, Andy Murray is due to play his first round match against India's Somdev Devvarman at Flushing Meadows on Wednesday.