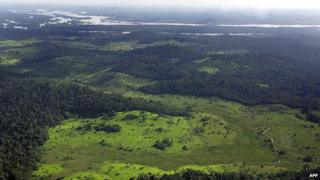 The Amazon jungle is one of the biggest rivers in the world covering a massive 7million square kilometres.

But Brazilian scientists think they've found an even bigger river running underneath it!

The team were studying old oil wells drilled in the area when they discovered another river four kilometres below.

They reckon that the Rio Hamza is just as long as the Amazon but could be up to four times wider.