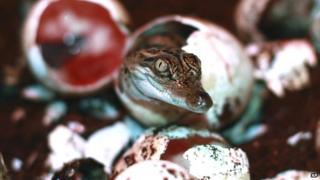 One of the rarest crocs in the world has come a little bit further from extinction.

Siamese crocodiles live in Southeast Asia and conservationists think there are less than 300 left in the wild.

A team of wildlife experts found 20 eggs in a nest in southern Laos and took them back to a zoo to keep them safe.

The eggs hatched last week and the little crocs will be released back into the wild in 18 months.

The conservationists decided to move the eggs from the nest to protect them from harm.

The Siamese crocodile grows up to three meters long but aren't very aggressive which is why they are endangered.

Experts think that they have been easy targets for hunters who have caught them for breeding in zoos.