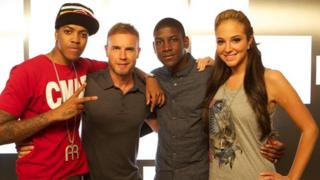 Gary Barlow has teamed up with his fellow X Factor judge Tulisa Contostavlos for this year's Children In Need single, which is a cover of Massive Attack's Teardrop.

Among the other performers are Tinchy Stryder, Chipmunk and Wretch 32.

The Take That star has said he wanted give the charity single a makeover by using current chart acts.

The single will be released before the live BBC Children in Need show on Friday, November 18.

In the past the fundraising single has included comedians or novelty acts by Gary Barlow said that he wanted to get younger urban acts involved.

Tulisa, told BBC Radio 1, "The track itself is really different but current and I think it's going to work."

Producer and singer Labrinth, said: "People are saying it's the coolest Children In Need record ever. That sounds kind of nice."