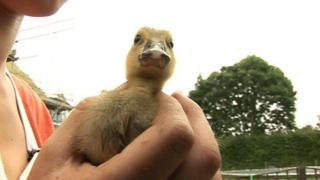 Penny the hen has an odd new brood of little quackers.

The speckled hen was given some duck eggs to look after when her owner noticed that she wasn't able to have any chicks of her own.

After nesting on them for one month, four fluffy ducklings were hatched and mum has taken all of them under her wing.

They've been called Happy Feet, Jack and Daffy but no-one has come up with a cracking name for the fourth one yet! 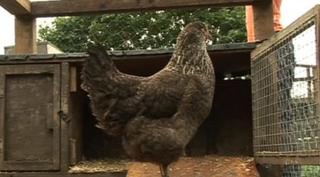 Eleven-year-old Ben and his mum look after Penny and the ducklings.

Ben helped the mother hen by bringing water and food to the nest-side so she didn't have to leave the eggs.

They've set up a nursing pond in a seed tray in Penny's coup where the ducklings can paddle and splash about.

When they get too big for the hen-run the ducklings will be moved to the garden pond, so Penny can still keep an eye on them!