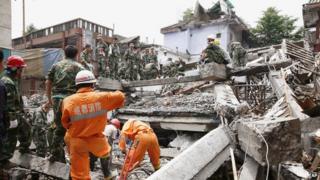 Earthquakes can be very dangerous, if you are in the wrong place.

They can make buildings fall down and set off landslides, as well as having many other deadly effects.

An earthquake that occurs at the bottom of the sea can push water upwards and create massive waves called tsunamis.

These waves can reach speeds of up to 500 kilometres per hour and cause massive devastation to anything in their path.

The strength of earthquakes is measured on a scale of magnitude.

Earthquakes have killed hundreds of thousands of people even though scientists are able to make buildings much safer and stronger than in the past.

Unfortunately many quakes happen in parts of the world where people can't afford to spend lots of money on safety measures.

Next: How often do earthquakes happen?