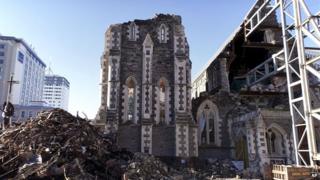 Although the ground we walk on seems solid, the Earth's surface is actually made up of huge pieces of flat rock called tectonic plates.

They float on top of a layer of softer, squidgy rock called the mantle.

The plates move very slowly, over millions of years, and where they come together is called a fault.

When the plates rub together, the movement forces waves of energy to come to the Earth's surface.

This causes tremors and shakes - and these are called earthquakes.

They can cause huge amounts of damage, particularly in cities and built-up areas, where buildings, roads and bridges can collapse.

Major earthquakes are very rare and the UK only ever sees minor tremors.

Next: Why are earthquakes dangerous?