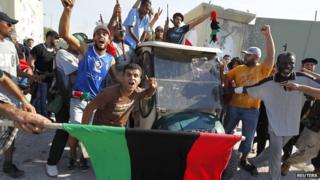 Anti-government rebels have got inside Colonel Gaddafi's headquarters in the Libyan capital, Tripoli.

TV footage has shown rebels destroying statues and celebrating inside the compound.

There has been fierce fighting since Sunday when rebel fighters stormed into the city. Both the rebels and the Libyan government have claimed to control Tripoli over the last few days.

And it's still not clear where Colonel Gaddafi himself is.

He has ruled Libya for 42 years, and rebels have been fighting to get rid of him since February. They're not happy with the way he treats his people and they want him out.

On Tuesday afternoon, journalists said they saw rebel fighters celebrating inside his headquarters after government resistance against them stopped.

But no-one's sure when this is going to end - or even what will happen if Colonel Gaddafi does lose power.