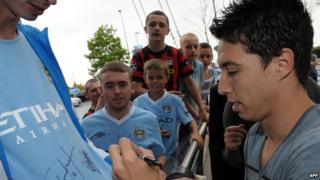 It's official: Samir Nasri has been sold to Man City for a reported £25m.

The midfielder's finally signed a four year contract having been linked with the blue half of Manchester all summer.

he Gunners have lost some key players, with Fabregas, Clichy, Eboue and now Nasri all gone within a few weeks.

Man City manager Roberto Mancini has said he'd have preferred to bring Nasri to the club sooner so he would have been able to get to know the other players before the season started.

Nasri scored 27 goals in 124 appearances for Arsene Wenger's side since joining from Marseille in 2008.

Nasri was in the last year of his contract at the Emirates Stadium, and didn't want to renew - so manager Wenger had to sell him to avoid losing him for free next year.

Arsene won't be happy at all at this news - in July he said on Arsenal's website: "You see about Fabregas leaving, Nasri leaving - if you give that message out you cannot pretend you are a big club."

But Arsenal's loss is certainly City's gain, with Roberto Mancini's side now looking stronger than ever, and serious title contenders this time around.