A 15-year-old schoolgirl from Swindon has become the youngest person in Europe to be fitted with bionic fingers.

Chloe lost her fingers after getting a life-threatening illness called septicaemia as a toddler.

She used to wear an artificial rubber hand, but now has a new hi-tech one that cost her family £38,000.

Chloe said of her new body part: "I didn't think it would move as well as it does."

The bionic fingers work thanks to sensors inside the glove that react to movements in her arm. 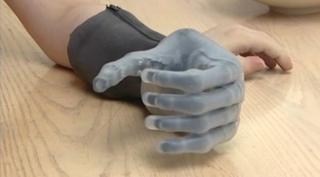 Chloe's bionic fingers were built by a company in Scotland

She found that life with her old rubber hand was difficult: "It didn't move so it was quite frustrating.

"Not a day would go by without tears coming... 'cause I couldn't really do a lot.

"People used to stare when I walked down the corridor and then start shouting out things... not very nice."

Her dad Pete said it's amazing what Chloe can now do with her new hand.

He added: "We'd go out as a family and people would stare for the wrong reasons - they stare now in amazement."