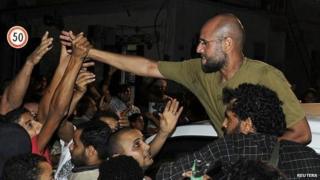 The son of Libyan leader Colonel Gaddafi has vowed to fight the rebels that want to overthrow his father.

But he turned up at a hotel early on Tuesday morning, telling journalists: "We have broken the backbone of the rebels."

He added that his dad was safe and the rebels had fallen into "a trap".

There is confusion over the situation in Tripoli - both the government and rebels are saying they have control.

It's not clear whether Saif al-Islam Gaddafi escaped from capture, or was never captured in the first place.

He'd been seen as the person most likely to take over the leadership of the country from his father.