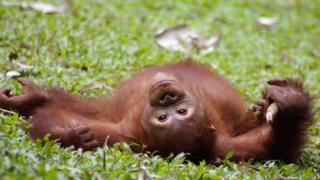 We all know orangutans like to swing, but did you know they can't swim?

The forests where the primates live are becoming smaller and smaller due to deforestation, so it's becoming harder for them to get about.

By building the bridges, it's hoped the orangutans will be able to cross rivers that used to keep them trapped in one area.

Chester Zoo's Nick Davis said: "The worry is that the forest out there has been so fragmented that the orangutans can't move around at all."

Orangutans are known for breaking objects so it's important for the team to use a tough polyester webbing - the material that the hammocks and swings are made from in the enclosure in Chester Zoo.