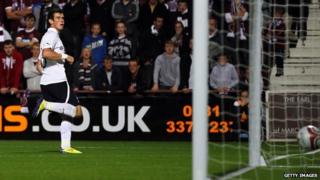 Tottenham put five past Scottish side Hearts in their their Europa League play-off first leg at Tynecastle.

Rafael Van der Vaart, Jermaine Defoe and Blake Livermore were all on the score-sheet by half-time.

Hearts manager Paulo Sergio said: "There is a huge difference in quality between the two teams but we should have done better in the first half."

"The first half was fantastic. We moved the ball around quickly and that is how I like to see us play," he said.

Gareth Bale and Aaron Lennon added to the demolition with goals in the second-half.