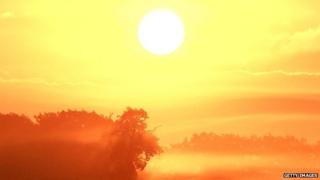 Plants and animals are moving faster than thought to avoid the effects of global warming, new research shows.

Scientists reckon species are moving away from the Earth's equator at a rate of about 20 centimetres per hour.

Since the 1970s, migration towards the North and South poles has been three times faster than earlier studies indicated.

And movements up hills and mountains, to cooler higher altitudes, have been twice as fast.

The team of British-led scientists made the discovery after studying data on more than 2,000 plant and animal species.

On average, they think species are moving 17.6 kilometres closer to the North or South poles every 10 years.

The team behind the study say their findings show a clear link between species migrations and climate change, as they say plants and animals in regions most affected by global warming are those that have moved the furthest.

Dr David Roy, from the team from the University of York's Centre for Ecology & Hydrology, said: "In Britain, the high brown fritillary butterfly might have been expected to expand northwards into Scotland if climate warming was the only thing affecting it, but it has in fact declined because its habitats have been lost.

"Meanwhile, the comma butterfly has moved 220 kilometres northwards from central England to Edinburgh, in only two decades."