Swedish house for sale with skeleton and medieval tomb 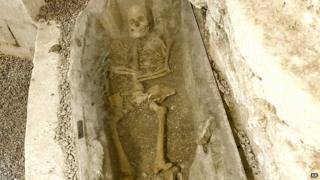 An unusal house is up for sale in Sweden.

It's got five bedrooms and in the cellar there's a medieval tomb and a skeleton. The house was built on the foundations of a Russian church in 1750.

You can clearly see the tomb with the skeleton through a piece of glass.

Leif Bertwig, the estate agent selling the property, believes that the remains are likely to be a Russian man who died around 800 years ago.

Mr Bertwig says that there's no reason to be afraid of the skeleton because it's on blessed soil and "rests in peace".