Stowaway mouse stops a plane from taking off in Sweden 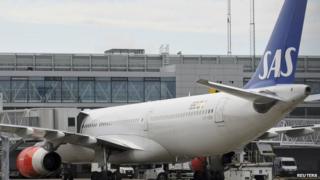 When passengers started boarding a flight from Stockholm in Sweden they spotted an unusual passenger scurrying between the seats.

A mouse was seen running around the cabin floor of the Chicago-bound flight.

Staff tried to trap the tiny rodent but they couldn't find him.

It's not the first time a tiny stowaway has caused problems; two flights from New York to London were cancelled in 2009 after mouse sightings.

Officials had to ground the plane in Sweden and had to find alternative flights for all 250 passengers.

The airline's boss said that the mouse could be a safety risk if he tried to nibble through the aircraft's wires.