Silly bullock gets its head stuck in a ladder 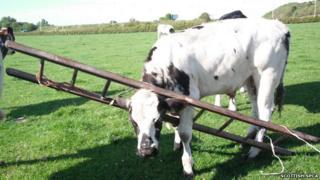 An animal charity has rescued a bullock in Scotland that got its head stuck - in a ladder.

Members of the public called the Scottish SPCA after spotting the udderly silly animal in a field in South Ayrshire last month.

The charity got in touch with the farmer who owned the Belgian Blue bullock and helped get it back to its cow chums injury-free.

The farmer said he had no idea how the ladder ended up in the field! 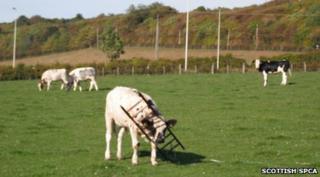 Scottish SPCA Inspector Kerry Kirkpatrick said: "When the job came through my first thought was, this is a wind-up, but I arrived at the field to find the bullock looking confused but surprisingly calm despite having his head wedged tightly in between the rungs of the ladder.

"The farmer's family rounded up the whole herd into a holding pen and we managed to gently pull the ladder off the bullock's head... it's a rescue I won't forget in a while."