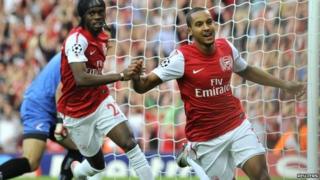 Arsenal have won their first match of the season against Italian side Udinese at the Emirates Stadium.

In their opening match in this year's Champions League, Theo Walcott got the only goal, just four minutes in.

It's been tough going for Arsenal fans - they've just lost their former captain Cesc Fabregas to Barcelona - so this is welcome news.

It's the first leg of a playoff which the Gunners have to win to get into the main group phase of the competition.