'200 tonnes' of oil in North Sea after spill

A second oil leak has been found in the North Sea, off the coast of Scotland.

The leak is in a large pipe near the Gannet Alpha oil platform, 113 miles off Aberdeen, but they're still trying to find out exactly where.

Shell, the oil company involved, is already dealing with a spill of more than 200 tonnes of oil from a leak found near the platform last week.

The government said it was a "substantial" spill, but they think it will break up and disappear naturally.

Environmentalists are keeping a close eye on the situation and are worried that birds and animals may already be at risk.

The RSPB has sent planes out into the area to see what damage the spill has done to local wildlife.

It's the worst spill in the UK for almost ten years, but is tiny in comparison to the huge oil leak in the Gulf of Mexico last year.

The last big spill in the UK happened in 1993 when an oil tanker ran aground off the coast of the Shetland Islands in the North of Scotland. 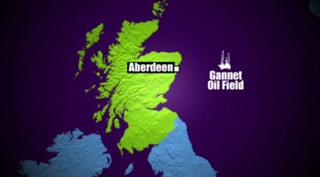 The oil platform is about 113 miles away from Aberdeen