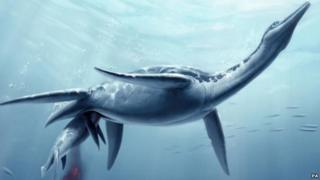 Plesiosaurs, the sea monsters of the dinsoaur age, gave birth to live young instead of laying eggs.

Scientists made the discovery by studying the fossil of a pregnant plesiosaur.

Experts have long been puzzled over whether or not the creatures laid eggs - but that's now been cleared up.

Other species that give birth to live young one at a time, such as whales and dolphins, are known to be caring and sociable parents.

It's thought that plesiosaurs were the same.

Study leader Dr Robin O'Keefe from Marshall University in America said: "Scientists have long known that the bodies of plesiosaurs were not well suited to climbing onto land and laying eggs in a nest.

"This fossil documents live birth in plesiosaurs for the first time, and so finally resolves this mystery."

Plesiosaurs lived in water, had long necks and four flippers, and some could grow to 15 metres long!