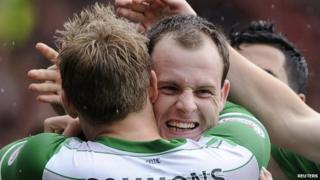 Celtic have made it two wins out of two, after they beat Aberdeen 1-0 in the Scottish Premier League on Sunday.

Anthony Stokes scored the winner in the 74th minute.

But the victory was bittersweet, as Celtic full-back Emilio Izaguirre was carried off the pitch with an ankle injury.

Meanwhile, Motherwell's 1-0 win over Hearts takes them top of the league, but they've played one more game than Celtic.

Jamie Murphy scored the only goal against a 10-man Hearts, after Ian Black was sent off for a reckless tackle on Keith Lasley.