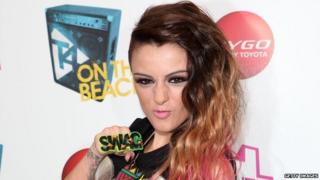 Cher Lloyd has proved her haters wrong - by storming to number one with her debut single Swagger Jagger!

She said: "Having a number one was the best thing I could have asked for."

Cher finished fourth in the 2010 series of The X Factor.

The late singer Amy Winehouse stayed top of the album charts with Back to Black.