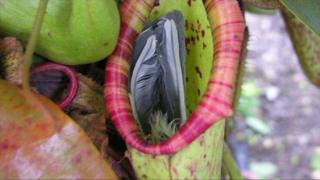 You might have heard of a venus fly trap but have you ever heard of a plant that can eat a bird?

This pitcher plant has killed and "eaten" a blue tit at a garden nursery in Somerset.

Nigel Hewitt-Cooper, who runs the nursery, was inspecting his tropical garden when he saw one of his plants had trapped the bird.

Experts reckon that it's only the second time that a carnivorous plant has ever been seen eating a bird.

It "eats" by attracting bugs by its bright colours and then traps insects in a pool of liquid which it then digests.

Mr Hewitt-Cooper was very surprised to see that the plant had caught a bird.

He said: "The larger ones frequently take frogs, lizards and mice, and the biggest ones have been found with rats in them, but to find a bird in one is pretty unusual."