Chat: Should live animals be used in films? 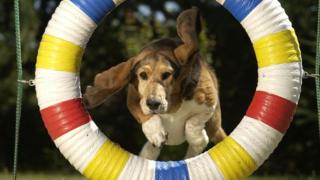 From Harry Potter's Hedwig to the penguins in Happy Feet we're all used to seeing animals on the big screen.

Loads of movies these days use computer animation to create their creatures but lots still use live animals on set who've been specially trained to do stunts and tricks.

Do you think that live animals should be trained to perform on screen? Is it cruel to keep animals to perform special stunts?

Maybe you think it's fine to train animals as long as they are kept in good conditions? Or perhaps you reckon it's cruel as they would be happier if they were in the wild?

"Well... it depends what they are used for. If they are in danger then that is unacceptable but if it is like in the film Cats and Dogs where they are relaxed and used in a funny and entertaining way then I agree with it."

"If they get treated nicely and don't have to do things they don't want to do I don't have any problem with it. It depends on what kind of animal it is too."

"Well I think no... it's better to put computer animals in the movies instead."

"I think that animals should be used in films because if they can do tricks and other sorts of things it is awesome!"

"I think it depends on what the animal is doing. If they are used in a way that could harm the animal then no, but if they're used in a good way that is not cruel then yes."

"I think it's ok to use animals for films if you let them have long runs, lots of food and they are not pushed too hard."

"No they should not be used in movies because they are getting forced to do things they don't want to do."

"I think using animals for stunts is ok, as long as they are safe and well treated."