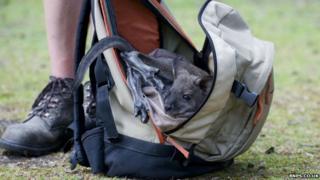 When you open up your school bag you'd expect to see some books, maybe an old sandwich... and a wallaby?

Keepers at Longleat Safari Park are raising a baby wallaby in a rucksack after finding it abandoned by his mother.

The six-month-old is being cared for by three zoo workers who are taking it in turns to carry him around on their backs.

By carrying him around in the bag, the baby thinks he's in his mum's pouch.

Keepers don't know why the red-necked wallaby was abandoned by his mother. 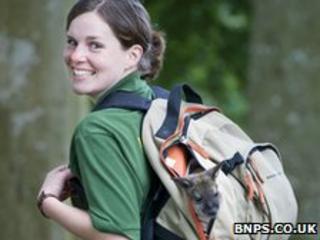 Other
The baby wallaby and his new mum!

When they first found him alone in the park he was very cold and the zoo workers were worried he might not survive.

They made the special rucksack to look after him in and started a routine of feeding him every two hours.

As well as making sure he is well fed the keepers have to stuff the bag with nappies and pillows to keep him warm and comfy.

Beverley Evans, one of the keepers, said: "At first it felt a little strange to be carrying this rucksack around wherever I went, but after a while you do get used to it and I hardly notice the extra weight now - although in recent weeks he is beginning to get a lot more boisterous."

The Safari Park hope that the baby will be introduced gradually to the existing group of wallabies when he is about 10-months-old.