Rangers booted out of Champions League by Malmo 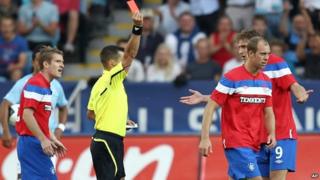 Rangers are out of the Champions League qualifiers.

The Scottish champions drew 1-1 away to Swedish side Malmo on Wednesday, but lost out 2-1 on aggregate.

It was a scrappy game that saw three players sent off - Steven Whittaker and Madjid Bougherra saw red for Rangers, while Malmo lost Ferreira Ricardinho.

Rangers boss Ally McCoist wasn't happy and said it was a lack of discipline that had cost his team their place in the tournament.

"The two sendings-off cost us dearly," he said.

"I haven't had a chance to look at the incidents but I think the fact that the lads gave the referee the opportunity to send them off was disappointing."