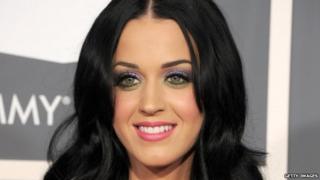 Katy Perry has made chart history in America by becoming the first female artist to have five number ones from the same album.

Her latest single, Last Friday Night, is the fifth hit from her Teenage Dream album to top the US Billboard chart.

It's also Katy's seventh number one overall, which ties her with Lady Gaga for the second most chart-toppers since the Billboard chart began 19 years ago.

Rihanna holds the record with eight number ones.