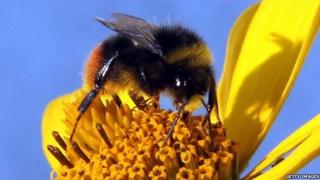 You would probably think that bees prefer living in the countryside, but scientists reckon they love buzzing around cities too!

Bee numbers are going down in Britain, but new research could show that the insects are doing well in cities.

There's a massive survey going on around Britain to find out where most of our bees are living.

It's thought bees like cities because there are lots of different places they live like gardens and parks.

Teams of people are going around 12 cities in Britain counting insects along a one kilometre line.

They are also doing the count in 12 farms and 12 nature reserves, and then will compare insect numbers.

Bees and other insects have a really important job pollinating flowers and plants which provide a lot of the food that we eat.

But there's been a massive drop in their numbers because of pesticides used by farmers, diseases and changes in the weather.

It's hoped this survey could help scientists find ways of boosting their numbers.