More than a million bats take over an American city 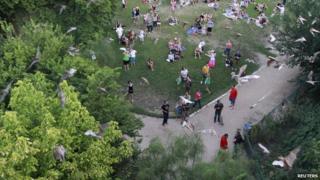 If you thought bats only came out at night- think again!

Around one-and-a-half million of the winged animals are currently living under a bridge and taking over the skies in the American city of Austin in Texas.

The bats have been forced to come out before sunset because of a harsh drought that has hit the area making it harder for them to find food.

Local residents have been flocking to see the creatures in the daylight. 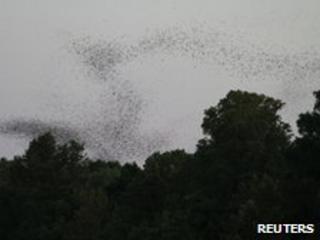 Reuters
The cloud of bats show up on weather radars!

The drought has destroyed loads of crops in Texas and killed lots of the tasty pests that the Mexican free-tailed bats like to eat.

Each night they fly out from under the bridge in a black cloud that's so large it shows up on local weather radar!

Conservationists don't think that anyone should worry about the drought harming bat numbers, as long as it doesn't last much longer.

Bat expert James Eggers reckons that "if we just have one to two years of drought, it's a natural cycle and it's not going to affect the species as a whole".

It's thought that about 100 million bats live in Texas. The largest bat colony in the world, about a whopping 20 million, can be found in a cave in the northwest of the state.