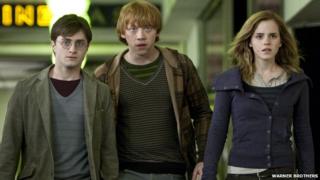 The latest Harry Potter film has smashed another record by breaking the $1 billion mark.

Deathly Hallows: Part 2 is the only movie of the wizarding series to make more that $1 billion (£609 million) at the box office.

It's only the ninth movie ever to break the billion dollar mark.

But it's got a long way to go to reach Avatar, which holds the record at the box office, making $2.8 billion (£1.7 billion) worldwide.