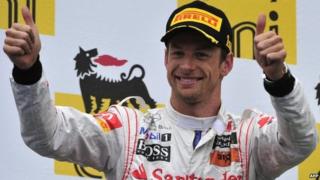 The Formula One driver finished ahead of championship leader Sebastian Vettel and Ferrari's Fernando Alonso.

It's Jenson's second victory of the season.

Lewis said he was pleased for Jenson about his victory, but was worried he let the team down.

It was the perfect result for Jenson in the 200th race of his career, and the same track where he got his very first grand prix victory five years ago.