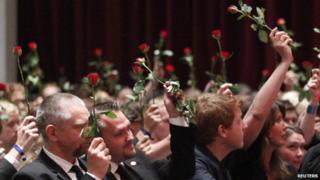 In Norway, a memorial service has been held for the people killed in last week's bomb blast and shooting.

Hundreds of people observed a minute's silence to remember the dead.

They held up red roses as a tribute. Flags were also at half mast across the country as a sign of national mourning.

76 people died in the bomb blast in Oslo and the shooting in nearby Uteoya island.