Adele to perform for first time at MTV video awards 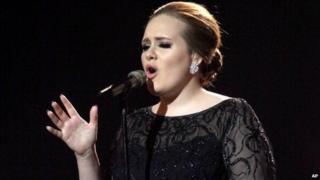 Adele is set to make her first performance at MTV's Video Music Awards next month.

The record-breaking singer, who's also nominated for seven awards, has the year's best-selling album, 21.

She hasn't done many live performances this year after having to cancel a load of concerts because of a throat problem.

Chris Brown and Lil Wayne will also be performing during the ceremony, in Los Angeles on 28 August.

Katy Perry has the most nominations this year. She's in the running for nine of the top prizes, including video of the year for Firework, best pop video and best special effects.