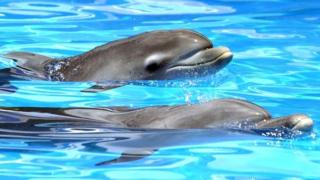 AP
Scientists have made a discovery about dolphins, like these

They've found special organs that can sense electricity underwater, on the dolphins' heads!

It's called electroreception, and it's common in fish and amphibians like sharks and rays, but this is the fist time researchers have discovered it in a mammal.

But it can be difficult when they're on the seafloor which is very muddy, so that's where electroreception comes in.

Because visibility and hearing is difficult in murky conditions, dolphins use their ability to sense electricity to work out where objects are around them.

Many fish use electric fields to find prey that's buried underneath the seafloor.