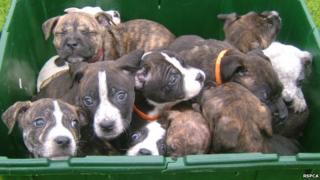 Twelve puppies dumped by the roadside in a recycling box are recovering at an animal centre in Wales.

The Staffordshire bull terrier cross pups, who are only a few weeks old, were found crammed "like sardines" in the plastic tub in Swansea.

They were taken to a local RSPCA animal centre for treatment, where staff say the pups are now doing really well.

It's hoped they'll soon be well enough to be rehomed. An investigation's under way to find out who dumped them.