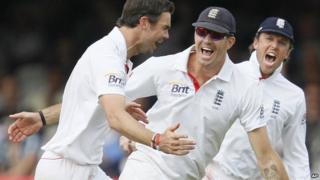 England's cricketers are a step closer to becoming the world's top Test team after storming to a 196-run win over India in the first Test at Lord's.

Captain Andrew Strauss praised his bowlers after they dismissed India for 261 runs in their second innings.

England now have a 1-0 lead in the four-match series. The second Test starts at Trent Bridge on Friday.

India's cricketers are currently top of the world rankings, but if England win the series by 2-0 or more, they'll overtake them.