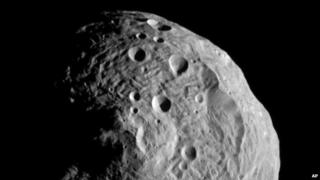 A Nasa space probe has sent back this amazing close-up image of the giant asteroid Vesta.

The Dawn spacecraft is the first one to orbit an object in the great asteroid belt, between Mars and Jupiter.

Scientists hope the mission will help them understand more about the beginnings of our solar system.

The probe will spend one year circling Vesta. It'll search for moons around Vesta, take pictures, and discover more about what the asteroid's like.

AP
Artist's impression of the Dawn probe in space

It's believed that many meteorites that fall to Earth come from Vesta, the second most massive object in the asteroid belt.

Asteroids are bits of rock in our solar system.

Most of them are found circling the Sun in a 'highway' between Mars and Jupiter - this is called the asteroid belt.

President Barack Obama has said he wants Nasa to send astronauts to an asteroid by the year 2025.